Credit for the arrival of interior design is most often given to the Ancient Egyptians, who decorated their humble mud huts with easy furniture enriched by animal skins or fabrics, in addition to murals, sculptures, and antiques that were painted. Gorgeous gold ornaments found in Egyptian tombs (like that of King Tutankhamen) revealed the importance of more lavish decoration for wealthier and strong Egyptians.

The Roman and Greek civilizations built upon the Egyptian art of Interior decorating and accessorizing. Both cultures celebrated civic pride through their development of domed-roof public buildings. In the house, elaborate Greek wood furniture had ivory and silver ornamentation. The Romans put special emphasis on blending beauty and relaxation, and house interiors reflected wealth and standing. Roman furniture made from wood, stone, or bronze was emphasized by cushions and tapestries. Both the Romans and Greeks used vases, mosaic floors, and wall paintings or frescoes to decorate inside spaces. 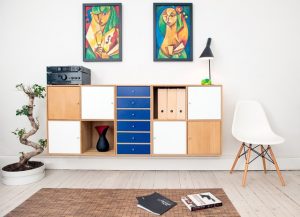 By this period of grandeur and ornamentation, there was a surprising Movement to austerity, caused by the constant wars of Medieval Europe and the growth of the Christian church. The Dark Ages were a period of somber wood paneling, minimal furniture, and stone-slab flooring. Even the wealthier people of the time, who included decorative touches such as wall fabrics and rock carvings, stuck to muted colours and simple textiles. Coming out of the Dark Ages, Europeans once more introduced colour and Ornamentation to their houses. From the 12th century, the most creative Gothic style was noted for its use of open interiors and windows to capture natural lighting.

In the 15th and 16th centuries, the French Renaissance (rebirth) headed to a renewed focus on beauty and art in interior design. Architects created spaces with elaborate decorative elements like marble flooring, inlaid woodwork, paintings, and furniture made from the best woods. The best examples of Renaissance interior design are located in the royal palaces, villas, and chapels of Europe.

After the Renaissance, the elaborate Italian Baroque style became popular throughout Europe. As exemplified in the Palace of Versailles in France, Baroque made use of these interior design components as coloured marble, stained glass, painted ceilings, and twisted columns. From the mid-18th century, European interior designers started favouring the Rococo style, revealing special appreciation for Asian porcelain, flower designs, and furniture inlaid with elegant materials such as mother-of-pearl and tortoise shell. The late 18th century neo classical appearance, an offshoot of the classical style of early Rome, made significant use of bronze, silk, satin, and velvet.

In the early 1800s on, however, in Europe and America, a fad had also started towards more liberty and eclecticism in interior design. Over the following two centuries, a variety of innovative and contemporary interior design styles would come and enter vogue including Art Deco, Art Nouveau, the minimalist look, and the industrial Bauhaus style. Another 19th century fad was the popularisation of interior design. While once reserved for royal palaces or the houses of wealthy citizens, interior layout in the 1800s started to reach the masses.

From the 20th century, the near-universal existence of home appliances such as stoves, washing machines, televisions, and phones produced a brand new challenge for interior designers, who had to plan spaces not just for aesthetic purposes, but also for performance.

The field of interior design has come a long way in the brick and sand days of the early Egyptians. Designers now have access to both artificial and synthetic materials, and they are able to draw upon the consequences of previous generations, while also continually trying to create new design trends. Design layouts are constantly changing throughout the decades, with many world wide changing trends.

Black fashion matters. That is the overarching thesis of the Museum at FIT's exhibit, Black Designer, co-curated by Ariele Elia,...